Inspiration from the best at the 13th Innovation Day 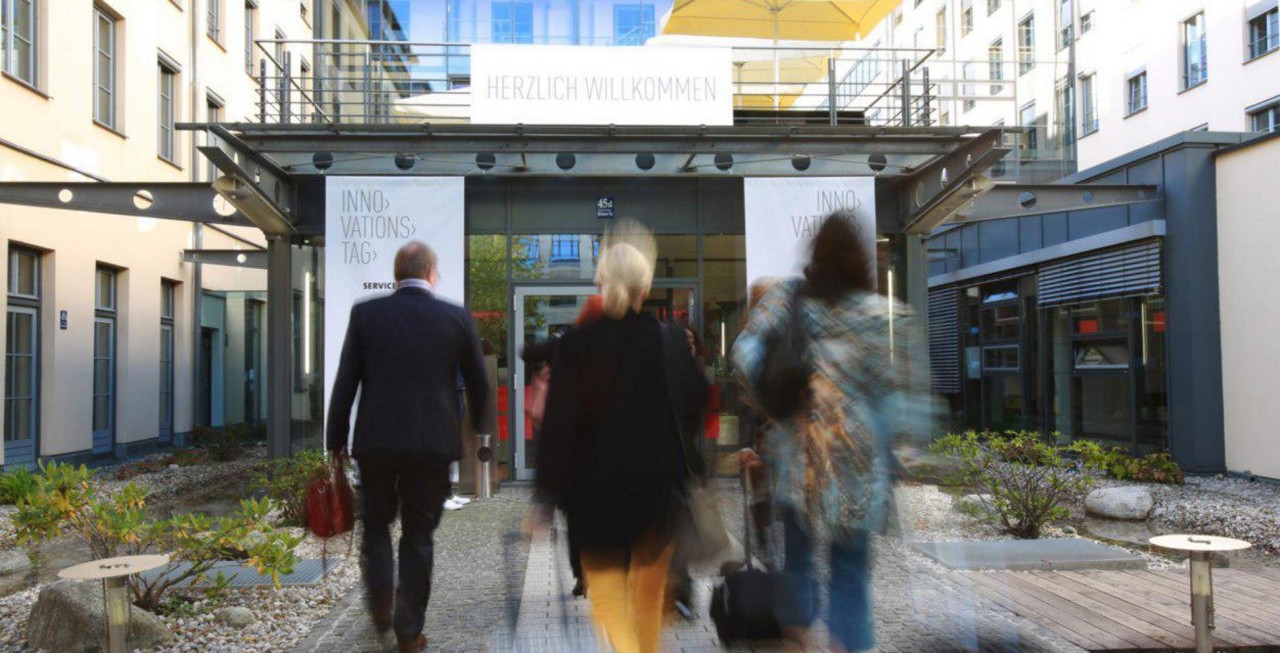 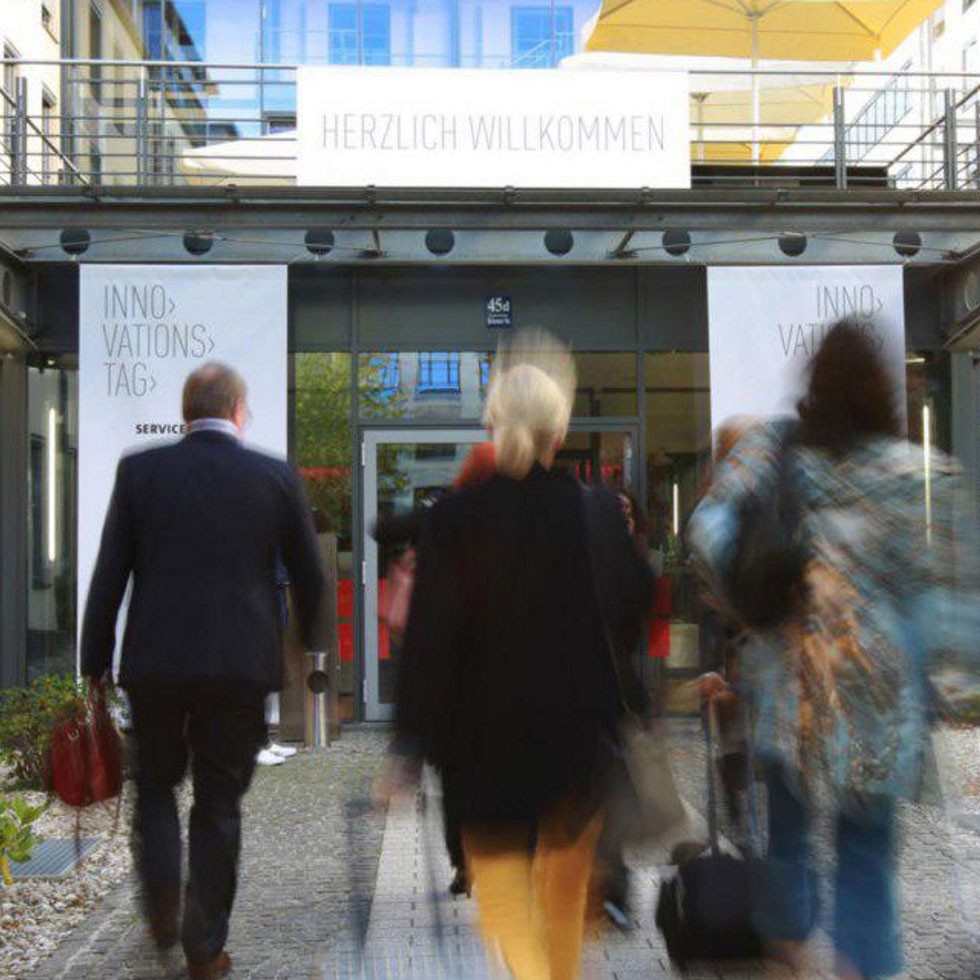 Inspiration from the best at the 13th Innovation Day

In cooperation with the partners IP Deutschland, the Frankfurter Allgemeine Zeitung, G+J e|MS, Red Bull Media House and Samsung, the Serviceplan Group is today organising the thirteenth Innovation Day in the House of Communication Munich. 350 decision makers from the worlds of business and media are meeting again this year to obtain and exchange new impulses and ideas and discuss the topic of innovation across all sectors.

Munich, September 28 2017 — Every year in autumn, numerous international top-contributors and personalities from the worlds of business, politics, media and communication meet up in Munich at the House of Communication to discuss current developments and trends in the media and communication industries through speeches, discussion sessions and workshops. This year, the Serviceplan Group as well as Partner IP Deutschland, Frankfurter Allgemeine Zeitung (F.A.Z.), G+J e|MS, Red Bull Media House and Samsung have invited more than 350 guests to travel to Munich to witness excellent speakers and personalities in speeches and conversations. After the welcome from Florian Haller, CEO of the Serviceplan Group, Ulrich Reitz, manager of the n-tv business editors and member of the editorial board, accompanies the participants throughout the day. The day’s speakers include Alexander Bard, Prof. Julian Nida-Rümelin, Martina Koederitz, Jürgen Kaube, Christoph Kucklick, Sebastian Matthes, Dirk Ahlborn, Alexander Nix, Mathias Müller von Blumencron, Marianne Bullwinkel and Karl-Theodor zu Guttenberg.

The keynote speaker is the Swedish cyber-philosopher and author Alexander Bard, whose statements are forward-thinking and to some extent provocative. We still don’t know where digital interaction and globalisation is going to take us. However, the visionary and industry pioneer is certain of one thing: they will turn our world upside down and write new rules and laws for society, business and politics. In his speech, the economist, author and music producer stressed that we cannot overestimate the effects of the digital revolution on society, politics and business. His key message: All that is important from now on is interactivity, co-creation and working together. This participation culture driven by technological developments will write new rules and laws for communication and coexistence.

Next on the agenda is a discussion between the renowned philosopher and cultural secretary ret. from Munich, Prof. Julian Nida-Rümelin, and Head of the Executive Board at IBM Deutschland, Martina Koederitz, about new ethical standards for a responsible approach to artificial intelligence. A.I. may make everyday life easier, save costs, increase efficiency, manage knowledge and improve medicine, but there are aspects that need to be taken into account by the drivers of digitalisation so that technical innovations such as IBM Watson do not become self-perpetuating, but rather so that humans can profit from them. A responsible approach to artificial intelligence then helps to design a humane and fairer future in a world shaped by digitalisation.

In a panel discussion about quality journalism in the digital age, Jürgen Kaube, Editor of the Frankfurter Allgemeine Zeitung, Christoph Kucklick, GEO Editor-in-Chief and Sebastian Matthes, Editor-in-Chief of Huffington Post Germany address the question: “Politicians, scientists, journalists, bloggers – who is telling the truth?” The attempt to answer this ignites a fierce dispute. In the face of the debate about Fake News and lying press, for the media it’s all about the preservation of its credibility – and thus nothing less than social relevance. The speakers stand for different journalistic concepts, but for the same challenge: What do serious news distributions or media coverage look like today – and how can we regain the lost trust of media users?

After lunch, the afternoon concerns a mode of transport that transports its passengers from Munich to Berlin in 30 minutes. This not only affects the way of travelling but life as a whole. Dirk Ahlborn, CEO of Hyperloop Transportation Technologies, wants to build the Hyperloop, a futuristic high-speed super train, for Tesla CEO Elon Musk and thus set new standards in terms of mobility. The manager, born in Germany, is sketching the path from the vision to a successful business model. And analyses which general conditions need to be met in order to turn spectacular innovation projects like the Hyperloop into reality.

The subsequent talk is all about Big Data. How can you get your message to reach everyone? Alexander Nix, Star-Marketing Strategist and CEO of Cambridge Analytica, bet on Big Data in the US election campaign – and won: He is considered a president maker and is currently one of the most hyped marketing strategists worldwide. In his speech and in the final discussion with Mathias Müller from Blumencron, Editor-in-Chief of F.A.Z digital media, the Brit explained what these developments mean for the future of the company and marketing.

With equally innovative topics and tasks, even in the social media industry, the discussion continued with a speech by Marianne Bullwinkel, Country Manager DACH Snap. The Instant Messaging App “Snapchat” wows 166 million users worldwide everyday with innovative features such as stories, geo-filters and lenses. In May this year, Marianne Bullwinkel moved from Facebook to the US start-up and is going to establish the business in the German-speaking world. The latest issues that the Media Manager deals with on a daily basis and that will form a topic of discussion on Innovation day, are: How can we assert ourselves on a highly dynamic market against much larger competitors and persist in the fight for advertising budgets? How can we convince users and marketers to stay loyal to the App with the ghost logo in the long term?

In an interview, the former defence minister and much sought after speaker, Karl-Theodor zu Guttenberg, analysed the outcome of the parliamentary elections, he described his experiences of the precarious relationship between the USA and Europe and took a look at the future of Europe. Six years ago, after the end of his political career, Karl-Theodor zu Guttenberg moved to the USA. There, he founded the consulting and investment company Spitzberg Partners, New York and manages an initiative at the Center for Strategic and International Studies (CSIS) in Washington which promotes transatlantic dialogue. Since 2015 “KT” has been part of the CSU team of experts for the Bavarian state elections 2018.

This year, guests will also experience other impulses during the Innovation day in the “Innovation Lounge”. Here, innovative and technical visions and developments will be presented and made tangible. In addition to the daily program, there is the option to experience innovations from tomorrow, today. The innovations will be presented at a total of three Samsung stations and can also be experienced through two tours. Among others, Samsung will showcase the intelligent voice assistant Bixby and how to transform a smartphone into a Desktop PC with Samsung DeX. Samsung Electronics also will showcase four innovative Creative Lab (C-Lab) projects: the technology for calling with your index finger, a smart belt for better health, smartphones as a 3D-Cinema as well as technology for simultaneously sharing VR with several people.

The two innovations tours are also a big highlight. A mixed reality holographic experience will be presented, in which digital projects and holograms fuse with the real world. The Plan.Net Innovation Studio will be introduced in the second tour, during which ideas will be developed and brought to life in design thinking workshops and hackathons. How it is possible to go down new paths with new digital products in the areas of mobile, AR, VR and the Internet of things will also be demonstrated.

Host and Serviceplan CEO, Florian Haller: “In 2017, those that don’t keep an eye on and help shape the current trends and themes, will vanish into thin air. Together with our partners IP Deutschland, F.A.Z., G+J e|MS, Red Bull Media House and Samsung we would like to welcome to the 13th Innovation day exciting personalities and visionaries of our time, who offer insights into their personal experiences and show where the journey can go.”

The celebratory end to the day is the award of the “CMO of the Year”. The winner of the award and therefore winner of the title “CMO of the YEAR 2017” will be announced at an exclusive gala dinner by Florian Haller at the Alte Bayerische Staatsbank in Munich. The gala is hosted by RTL presenter Wolfram Kons.

Eric Liedtke was elected by colleagues because this year’s motto of the award is “from CMOs for CMOs”. Whilst Germany's top ad spenders, the nominated brands from the Best Brands study as well as nominations from the panel of 20 experts have been producing potential candidates for the award since 2014, the CMO of the Year Council is now responsible for identifying the finalists. It consists of 50 chief marketing officers from renowned German companies and evaluates the potential awards winners. The top candidates identified are then discussed and assessed by the award jury, with equal representation, in a session lasting several hours. The dossiers prepared by the institute for marketing at the Ludwig Maximilian University of Munich (LMU) form the foundations here.

More details about the speakers, the program, photos and also numerous interesting articles can be found on the www.innovationstag.de/en/ website.

Over the course of the day, interesting quotes, photos and more can be found on the social media sites at twitter.com/innoloft and facebook.com/innoloft. Photos for editorial use will be available during the afternoon/from Friday sp-url.com/itag-fotos2017.