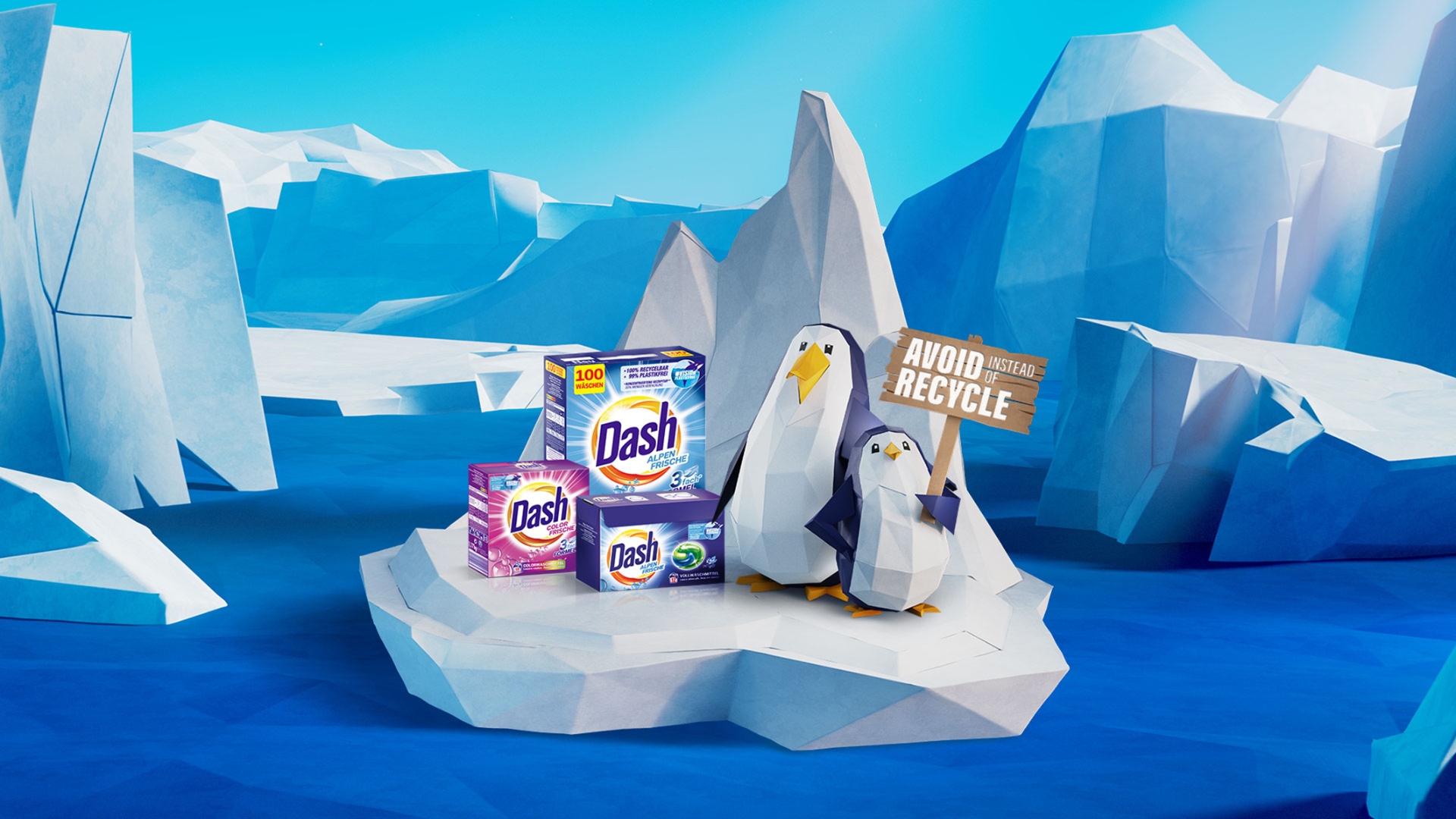 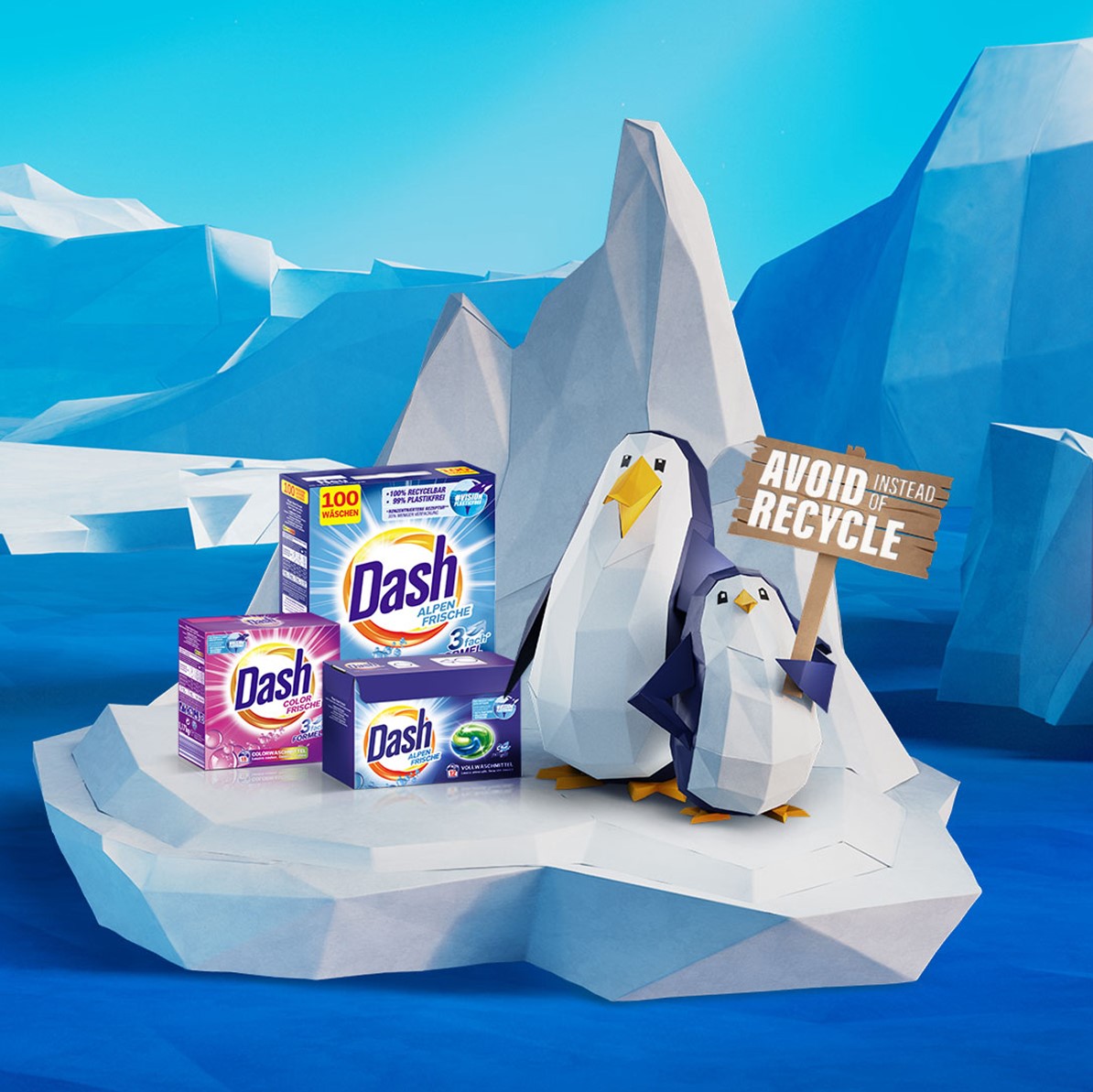 If mankind does not reduce its plastic consumption, there will be more plastic than fish swimming in our oceans by 2050. That's why the detergent brand Dash has set itself the goal of becoming fully plastic-free. The brand is taking its customers along on the journey with an emotional creative campaign from Serviceplan Cologne.

Cologne, November 25, 2021 – Since last week, the centerpiece of Dash's current #VISIONPLASTICFREE campaign can be seen on cinema screens in major German cities. The moving animated film transports viewers into the magical world of a penguin child playing in the ocean. But appearances are deceptive. The shoal of glittering fish turns out to be a lot of discarded soy sauce bottles, the elegantly floating jellyfish turn into dangerous plastic bags, the majestic orca is really just an old pool float. The little penguin's world: a sea of plastic waste. But what if everything were different? The spot asks one of the most important questions of our time.

The campaign spot is available here. In preparation for the theatre campaign, the film was posted on YouTube in October and has already generated over half a million views. With it, Serviceplan Cologne's campaign work for #VISIONPLASTICFREE successfully enters its third year. The campaign cleverly combines continuity in the bitterly serious message with emotionally engaging storytelling.

"A future that is as plastic-free as possible concerns us all, no matter whether consumer or manufacturer," says Alexander Kophamel, Marketing Director of Dalli Group. "With a campaign like #VISIONPLASTICFREE, we were particularly concerned with hitting the zeitgeist and the right tone. It was important to us to convey our goals and our message in an emotionally touching way, but never be preachy. With Serviceplan Cologne, we know we have the perfect partner at our side to stage our vision and get closer to our goal, step by step."

Jan Propach, Managing Director Serviceplan Cologne: "Our story about the penguin child uncompromisingly shows viewers what plastic in our oceans means for us and our planet. In stark contrast to the sad facts is the loving and modern papercraft look. It stands out from the crowd and gives the idea the lightness it needs. In this way, we convey the serious topic of plastic reduction in a playful way and thus increase attention in a momentous way via emotionalization."

The campaign was developed in close and integrated collaboration, both internally and externally. A team of experts from all relevant disciplines complemented each other perfectly: from creation to digital, PR, media, sound and 3D design. The result: a film that is bursting with attention to detail – from the lovingly created artwork to the blockbuster-worthy sound and soundtrack, which was composed and recorded especially for the film. In addition to Serviceplan Cologne, Mediaplus, Serviceplan PR & Content and hmmh were also involved in the conception and implementation within the Serviceplan Group.

The campaign is implemented comprehensively across a broad mix of communication channels. Accompanied by various campaign assets in print, OOH, POS and social media, the little penguin and his family promote a more reflective and mindful approach to plastic consumption.