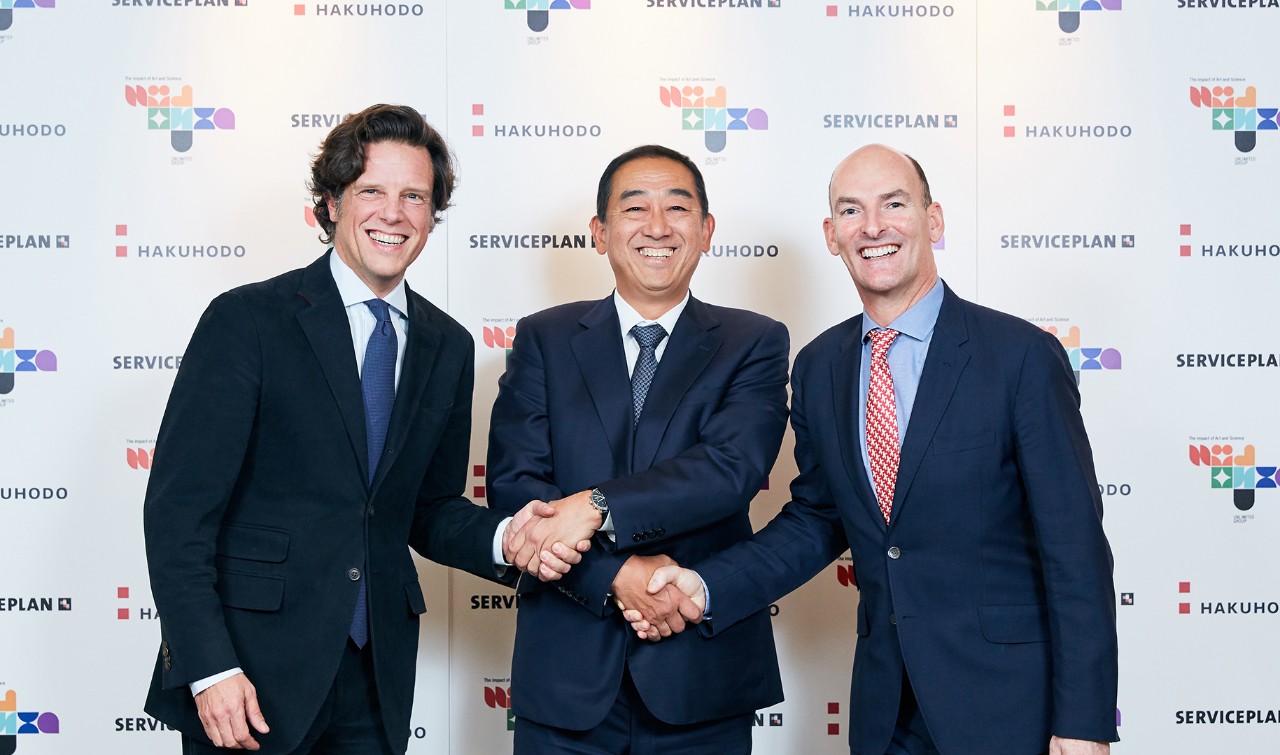 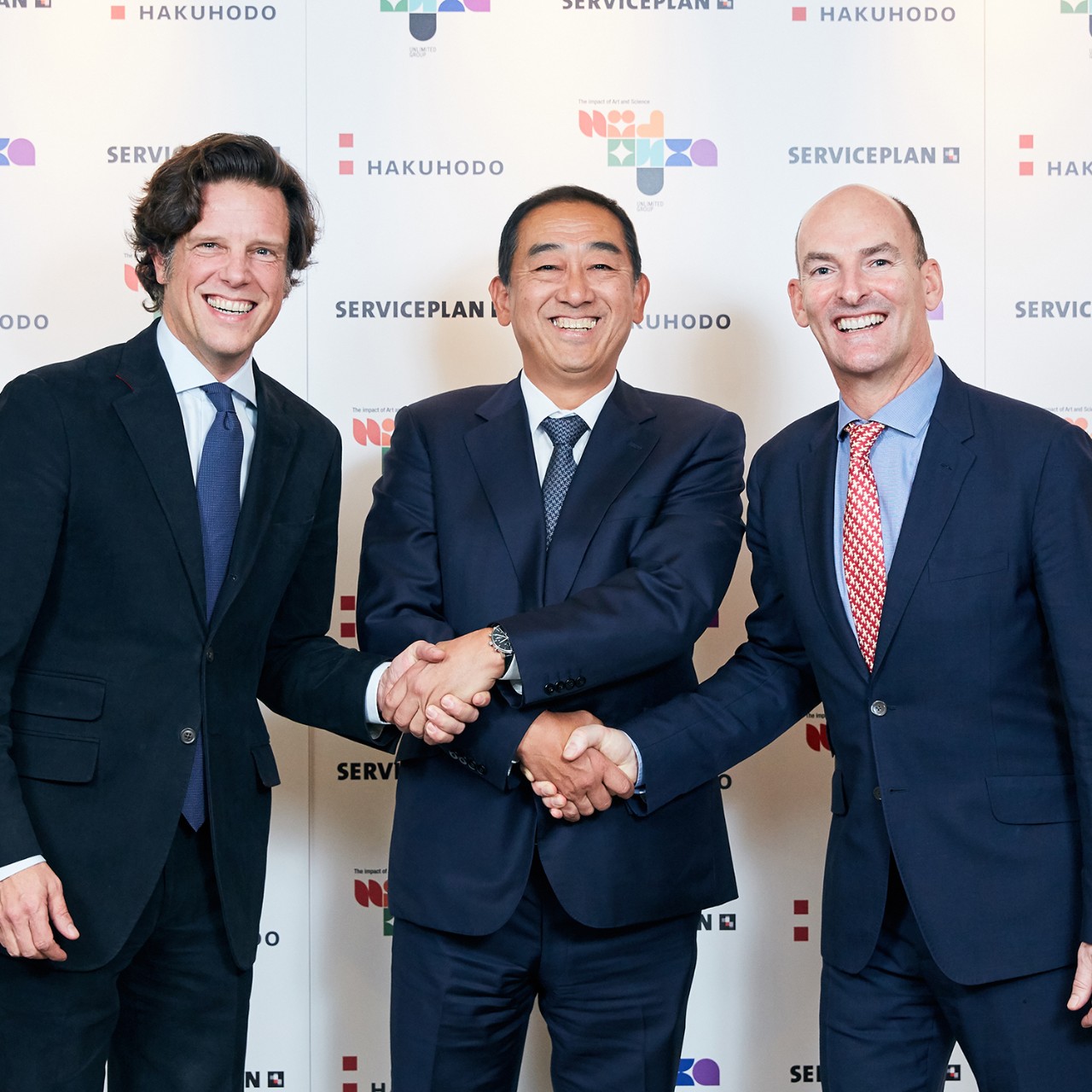 Munich, 15 January 2019 — The three independent agency groups - Serviceplan, Hakuhodo and Unlimited – have signed a strategic alliance to provide clients and prospects with a genuine global offering based on locally rooted insight.   This unprecedented cooperation is designed to offer existing clients and prospects a global presence based on regional expertise.

Together, the UK, German and Japanese agencies are building joint teams to provide data driven, customer-centric, integrated solutions that will transform clients’ business around the world, with a presence in all major markets. The alliance will enable the three to serve existing clients and pitch for global business as a single unit, with a flexible approach to working together. Unlimited, Serviceplan and Hakuhodo have already teamed up for a pan European pitch due to take place in the first quarter of 2019.

UK-based Unlimited, and Europe’s biggest independent network Serviceplan – which has more than 4,000 employees in offices across Europe as well as in New York, Dubai, Seoul, Beijing, Shanghai and Hong Kong – have both worked on BMW for a number of years.

Like Unlimited Group, Serviceplan, through its “House of Communications,” houses a number of specialist agencies across CRM, digital, research, PR and advertising. Hakuhodo has offices in 20 countries and regions across Asia, employing 10,000 people.

This partnership also offers mutually beneficial expertise internationally across the alliance in the fields of creativity, media, data and technology.

Florian Haller, CEO of the Serviceplan Group said: "We are really excited about collaborating with one of the key players in South-East Asia. The affinity with our philosophy at Serviceplan was clear from our initial personal contact. As a result of this unique alliance between agency groups rooted in Germany, Japan and the UK, we can offer our clients the best service in the major economic region of South-East Asia"

This new strategic alliance with Hakuhodo Group is based on an existing partnership between Serviceplan Group and Unlimited Group. Unlimited Group is an award-winning digital agency group offering seven core disciplines, each led by a core agency.  Unlimited Group have 850 people based in London, Bristol, Winchester and New York.

The Serviceplan Group has experienced rapid international expansion over the past ten years. In 2006 CEO Florian Haller first started to bring to life his vision of creating the world’s first independent global agency group originating in Germany.

Tim Bonnet, President of the Unlimited Group commented: ‘We have had a relationship with Hakuhodo and partnership agreement with Serviceplan for a number of years and as this grew in success, we are delighted to formalise this into a global alliance. We are really excited about the expanded offering and capabilities this will bring to our existing clients as well as the agile, innovative and data lead offering we can offer new clients on a global scale.’

Masayuki Mizushima  Hakuhodo President and CEO Hakuhodo added: ‘In a time where our clients are faced with change as never anticipated before with the dramatic evolution of technology and acceleration of globalization, this strategic alliance with our longtime friends, the Unlimited Group and Serviceplan, is based on a firm belief and respect for the “sei-katsu-sha,”or living consumer — always taking on a central role where human emotions, thoughts and dreams reside. This belief leads us to an alliance that is built beyond the data driven approach and elevated to reflect our “sei-katsu-sha” Consumer Driven - Data Proven positioning.’

INTERNATIONALISATION OF THE SERVICEPLAN GROUP

In addition to the German sites in Munich, Hamburg, Bremen, Berlin, Frankfurt and Cologne, company locations with Houses of Communication have now been established in Vienna, Zurich, Milan, Brussels, Dubai, Paris, Lyon, Moscow and Madrid, along with branches in locations such as Delhi, Beijing, Shanghai and Seoul. The goal is to develop all branches into Houses of Communication, which bring all communication disciplines together in one place.

Since May 2018, there has been a House of Communication in New York. The three familiar pillars of the Serviceplan agency group are represented here under one roof: Serviceplan, MODCo/Mediaplus and the digital agency T3. Serviceplan New York currently consists of 65 staff and is managed jointly by Stefan Schütte, Nick Johnson, Jay Benjamin and Nick Chapman, while MODCo/Mediaplus is led by Erik Dochtermann and Eileidh Bamford. The digital agency T3 is a partner agency run by Ben Gaddis.

Thanks to its close cooperation with other partner agencies, the Serviceplan Group is also represented in some of the world’s most important economic hubs. Its close relationship with the agency group Unlimited means that the Serviceplan Group is represented in the United Kingdom (London). A partnership with the agency Ariadna expands Serviceplan to the cities of Buenos Aires, Bogota, Lima, Mexico City, Miami, Panama City, Santiago and São Paulo.

Markus Noder, Managing Director of Serviceplan International, explains: "This global alliance is the next step in being able to provide our customers with a truly 'global' service offering. Hakuhodo is a respected trans-national agency group in Asia and the number two in Japan. Furthermore, we already have a long history of success with the Unlimited Group."

Founded in 1895, Hakuhodo is an integrated advertising and communication agency headquartered in Japan. The core agency of the Hakuhodo DY Group, Hakuhodo is the world’s 6th largest advertising agency according to Advertising Age’s “Agency Report 2018.”

The Hakuhodo Group has offices in 20 countries and regions, and over 10,000 specialists working in Japan and abroad. Hakuhodo is strengthening its structure in emerging countries, particularly those in Asia, as it prepares to further expand its business across the region.

Sei-katsu-sha insight is the foundation for Hakuhodo’s thinking, planning, and brand building. It reminds us that consumers are more than shoppers performing an economic function. They have heartbeats. They are individuals with distinct lifestyles. Hakuhodo introduced this term in the 1980s to emphasize its commitment to a comprehensive, 360-degree perspective on consumers lives.

Renowned for its creativity, Hakuhodo has twice won the Grand Prix at Cannes Lions International Festival of Creativity, and was the only agency headquartered in Asia to be awarded a Special Lion commemorating Cannes Lions’ 50th anniversary in 2003.

Unlimited Group is an award-winning digital agency group. Through expertise in Art and Science, Unlimited unleashes the power of data, insight and digital creativity to deliver maximum impact, providing clients with Unlimited Possibilities to succeed.

Unlimited has 850 people based in London, Bristol, Winchester and New York.

Unlimited and Serviceplan first signed a partnership agreement in 2014