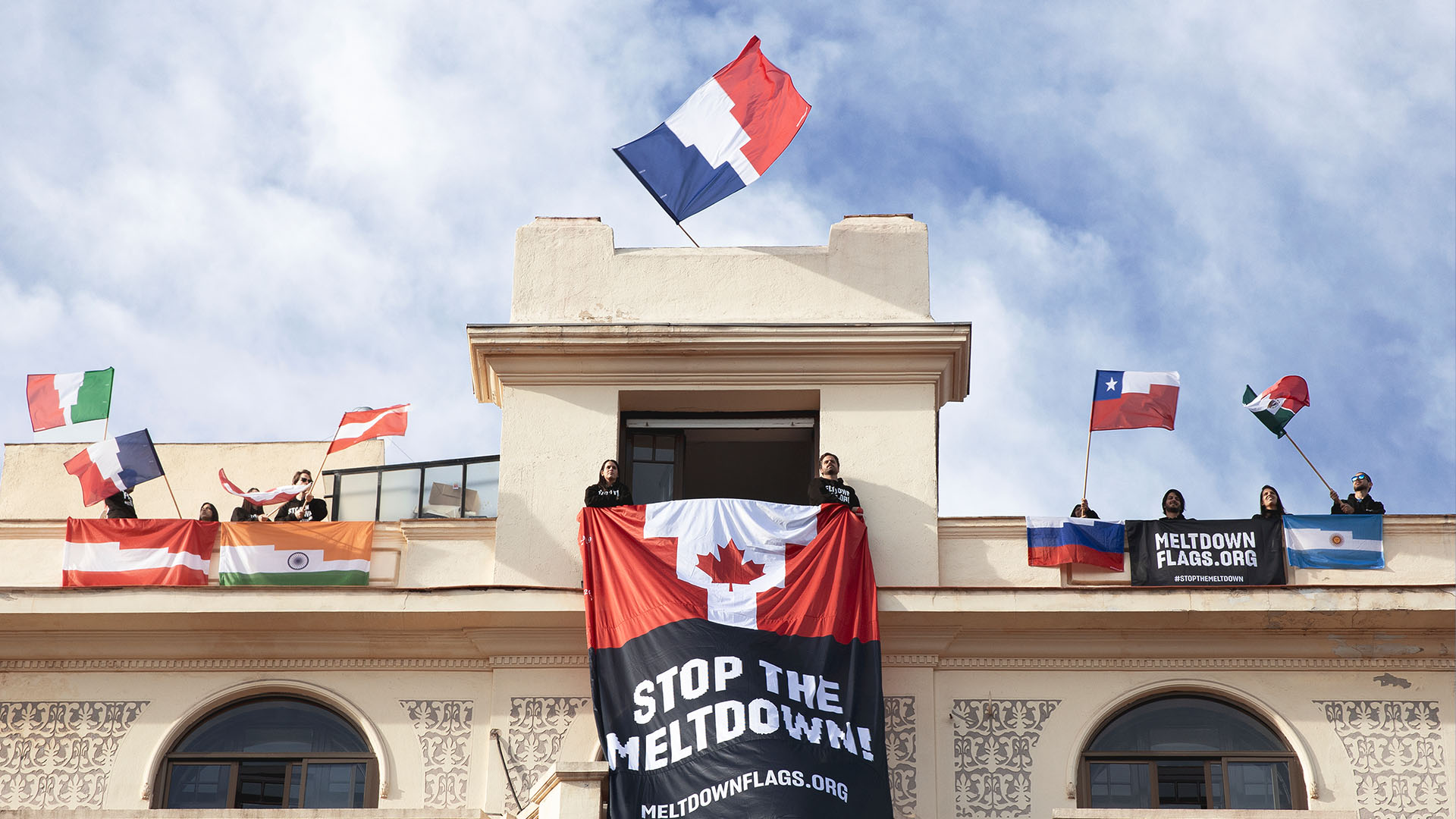 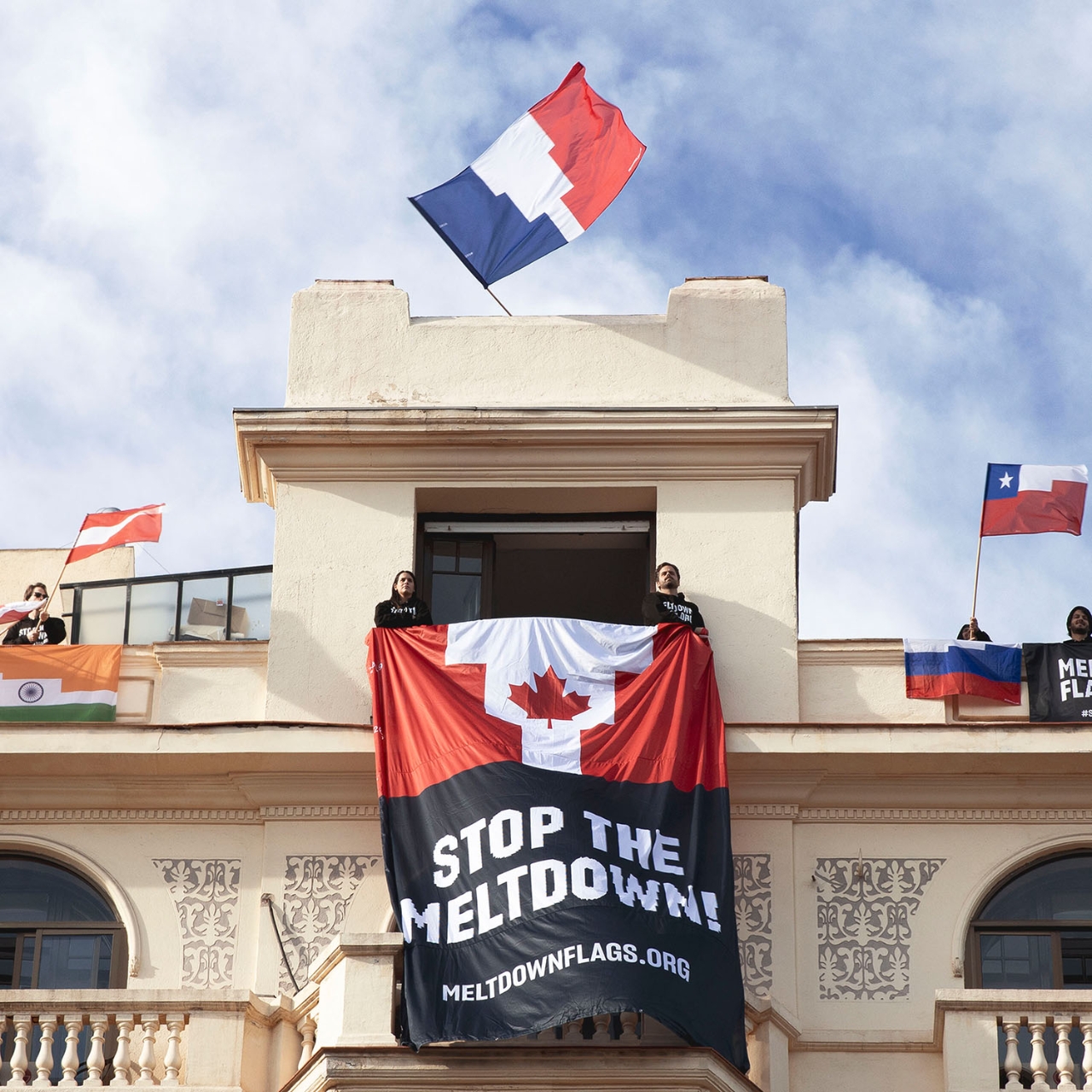 Munich,  9th November 2020 – After almost a year of protests, which began in December 2019 when handsewn Meltdown Flags were carried through the streets of Madrid during the COP25 climate change conference, and continued with an ongoing educational mission and an exhibition of the flags in the alpine museum of legendary Italian mountaineer Reinhold Messner, ‘Meltdown Flags’ will stage a digital protest during the cancelled COP26 between 9-19 November 2020.

Today, on what would have marked the first day of the most important international climate meeting of the year - silence.  The COP26 was due to begin in Glasgow this week and was postponed to November 2021 due to the Covid-19 pandemic. This new date may be too late for the planet’s ice, for Scientists have reported Greenland's ice sheet has passed a "point of no return".  Therefore the mission of ‘Meltdown Flags’ is to bring the urgent topic of glacier meltdown back to the table in these unsettling times of the pandemic and political turmoil, in the form of a digital protest between 9-19 November, the original dates of the now-postponed United Nations Conference of the Parties (COP26).

The climate initiative "Meltdown Flags" combines data and design to show the serious consequences of glacier extinction. Flags are seen as symbols of the highest national representation and emotional value - especially among politicians. The concept behind ‘Meltdown Flags’ is simple: the effects of global warming and consequent glacier retreat is visualized in the flags through reducing the proportion of the color white in the national flags of countries with glaciers, according to historical data and glacier projection

s.The data utilized in the ‘Meltdown Flags’ project has been obtained from databases and projection models from METER, UNESCO, NASA, and the universities of Zurich and Innsbruck, among others. Key dates are the years 1995, 2020, and 2050 referring to the year of the first UN Climate Change Conference in Berlin, the present-day status, and the goal year set within the Paris Agreement to limit the global temperature increase to 1.5°C, respectively.

‘Meltdown Flags’ was launched in December 2019 during the 2019 COP25 in Madrid, and the hand-sewn ‘Meltdown Flags ‘are currently on display in the alpine museum of legendary Italian mountaineer  Reinhold Messner in Bolzano, until 2021.

The flags of Argentina, Austria, Canada, Chile, France, Greenland, Iceland, India, Iran, Italy, Mexico, Norway, Pakistan, Peru, Russia, USA and Uzbekistan, all countries with glaciers, have been converted into ‘Meltdown Flags’, with the white areas in each flag reduced according to the historical data.  Glacier projects for each country were collected from METER, UNESCO, NASA and the Universities of Zurich and Innsbruck.  All flags can be viewed here, along with details of the ‘Meltdown Flags’ project: https://meltdownflags.org

With the help of prominent supporters in the field of climate change and the enivornment, the initiative will put out informative and interactive content via social media during 9-19 November, from videos on glacier science to raising flags as AR filters. Partners and other websites can integrate interactive flag widgets easily into their content by visiting this site: meltdownflags.serviceplan.io

Despite the dominant presence of Covid-19, the ‘Meltdown Flags’ project has gained wide support in 2020. From world-renowned Italian mountaineer Reinhold Messner and French glaciologist Dr. Heidi Sevestre, to UN environmental ambassador Malcolm Wood. From global climate organizations such as Protect Our Winters to national climate legislation groups like Fundación Glaciares Chilenos, who use the Chilean Meltdown Flag to advocate for glacier protection in the country’s legislation.

Reinhold Messner commented: “I’ve been to all these countries. In many places where we climbed over glaciers in the past, there is [no more] ice. I’ve seen the dying glaciers visualized in these “Meltdown Flags” with my own eyes.”

Dr. Sevestre explained: “Projects like Meltdown Flags are so important because as scientists we often underestimate how little people know about glaciers. We need these initiatives to make science accessible, to make it exciting, but above all to put this knowledge into practice."

Christian Hertel, VP Marketing, METER Group added: "We have documented and researched global climate change for decades. With Meltdown Flags, we want to make that knowledge accessible, to educate about the importance of environmental science, especially of glaciers, and encourage people to act."

Matthias Harbeck, CCO Serviceplan Germany said: "Serviceplan Group is aware of its responsibility and has recently launched a worldwide climate-neutral plan, starting in Germany. We all love our home – and we all love the world we inhabit. With ‘Meltdown Flags’, we want to appeal to decision-makers worldwide to protect the world we all call home from the climate crisis."

The eradication of the world’s glaciers would have dire consequences on nature, biodiversity and ultimately on the fate of humanity, warn the world’s leading scientists and Sir David Attenborough in his new documentary ‘A Life On Our Planet’ and accompanying book.  Greenland’s ice is melting faster than at any time during the past 12,000 years, and increased loss of ice could trigger sea level rise of up to 10cm by the end of the century.  The rate of glaciers meltin matches any in the geological record for the Holocene period (the period since the last ice age).*

For every centimeter of sea-level rise 1 million people would lose their homes. The planet’s most vital resource is also at stake: Glaciers are a vital life source, storing 69% of the world's freshwater. If they were to melt completely, humanity would lose access to drinking water, a source of energy, and irrigation. Complete meltdown would bring sea level rise to a record high.

UN Secretary-General, António Guterres, attests to a "lack of political will" of governments to meet their contractually-agreed climate targets. Patricia Espinosa, executive secretary of the U.N. Climate Change agency, has urged governments to restart their post-pandemic economies with climate goals in mind.

‘Meltdown Flags’ show the past, current and future state of meltdown. An insight into a dangerously accelerated rate of glacier melt. Starting from 1995, the year of the first United Nations Climate Change Conference, to 2050, the year set out by the UN to reach net-zero emissions and limit global temperature to 1.5 °C.

The data visualization takes place in both physical and virtual space: On the campaign site https://www.meltdownflags.org all flags and data can be explored interactively. Visitors can support the cause in various ways, from CO2 compensation to creating visuals using custom typography. AR filters act as crossmedia connection by turning physical flags into interactive mobile data visualizations, a technique used for educating on climate change in school, for example in India.

The goal of the ‘Meltdown Flags’ initiative is to educate about the importance of glaciers, provide solutions to reduce emissions and put pressure on politicians to deal with the climate crisis.

Further information on how to embed the interactive iFrame on your website via meltdownflags.serviceplan.io.

Further material and information on "Meltdown Flags" via: