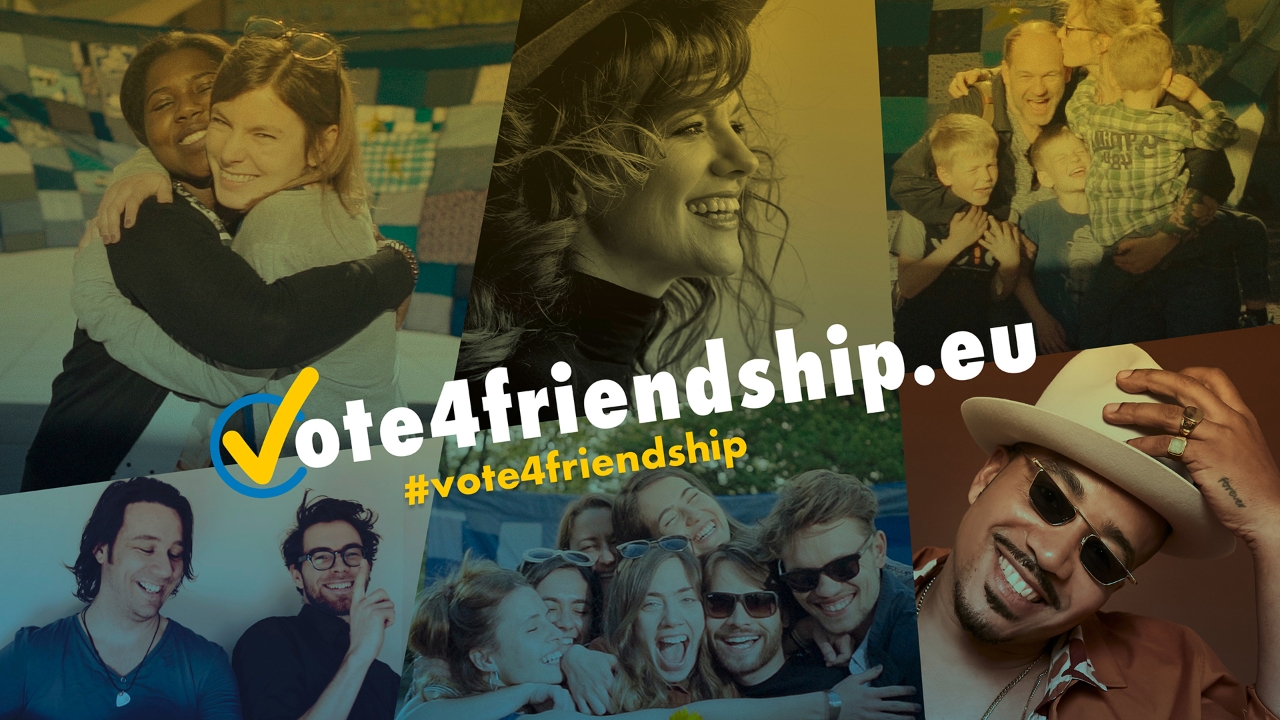 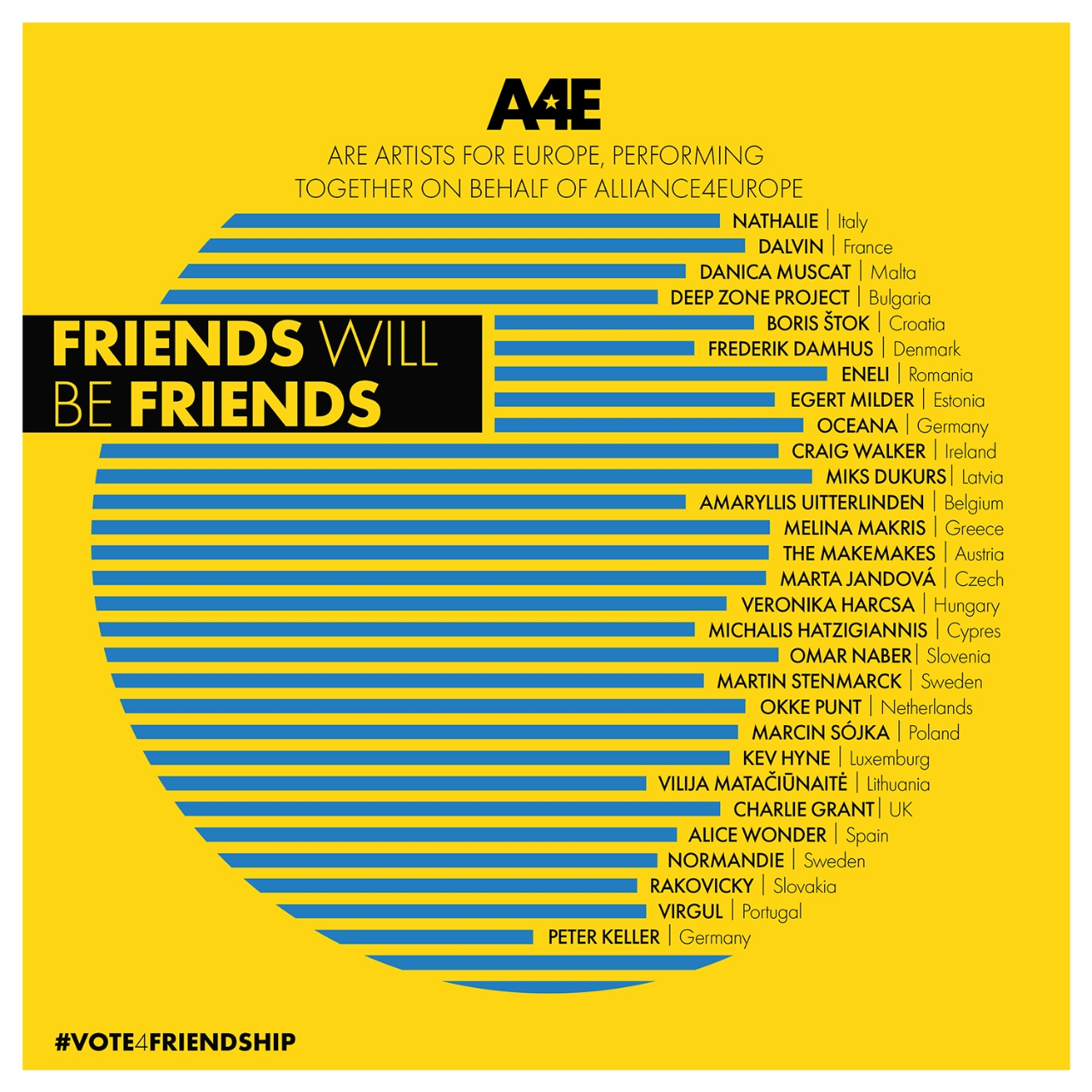 With a new version of a classic Queen song and high-profile advocates, a music campaign is drumming up support for the European elections: in favour of a United Europe and against nationalism and marginalisation

Munich, 13 May 2019 – Just imagine, it’s the European parliamentary elections – and only opponents of Europe turn up at the polls. Instead of waiting around to see what happens, Alliance4Europe – an informal, independent network of 50 civil society organisations and initiatives from 20 EU member states – is taking action now. On 13 May, Alliance4Europe is sending out a strong musical appeal to the whole of Europe with the #vote4friendship campaign: 30 artists from 28 member countries are coming together to sing the Queen hit “Friends Will Be Friends”, which the band made available royalty-free for this purpose. The collaborative music video will be released across Europe. Alliance4Europe’s campaign is primarily aimed at young EU citizens who take the achievements of the European Union for granted but, for the most part, do not go to the polls. The last time a new European Parliament was elected, only 43.09 percent of all eligible voters actually cast their vote.

A song for friendship and freedom – and against hatred and marginalisation
The focus of the campaign is a three-minute music video of the Queen song “Friends Will Be Friends” featuring 30 artists from 28 countries. As well as the musicians, the video also features people from every European country who are coming together to stand for the campaign’s pro-European message. The participating performers, including soul and funk artist Oceana from Germany, Portuguese singer Virgul and Swedish alternative rockers Normandie, are not only making a musical contribution, but showing their commitment to the idea of a pan-European friendship in emotional video statements, which they are actively sharing with their national and international fans and followers.

Friends of Europe, unite!
#vote4friendship is aimed in particular at young Europeans who are meanwhile hard to reach with traditional campaigns and therefore more easily manipulated by targeted disinformation in the digital media. The campaign relies on the power of dialogue and is based on digital building blocks and formats that can be actively shared among civil society. A wide supporter network of European influencers, prominent multipliers like Ulrich Wickert, Christopher Clark, Timothy Garton Ash and Nick Stern and organisations like Serviceplan Group, Deutsche Post Foundation, the BMW Foundation Herbert Quandt, ARB, CoInvest, Pulse of Europe and The Good Lobby shares a common interest: to strengthen the European idea across all borders from a cultural, economic and living perspective. All campaign contents, videos and statements are therefore available on the website www.vote4friendship.eu to download and share on all social media channels and platforms.

Serviceplan Group has been supporting Alliance4Europe since autumn 2018 with extensive expertise ranging from strategy to PR. The agency Serviceplan Campaign 1 is responsible for the creative concept of the #vote4friendship campaign as well as the management of the entire implementation.

No vote, no voice
Of all EU citizens who are eligible to vote in the European elections, over half don’t. At the last elections for the European Parliament, the voter turnout throughout Europe was 43.09 percent. “By staying silent, millions of EU citizens, who enjoy living in a united Europe and reap its benefits on a daily basis, are opening the door to a radical minority that wants to jeopardise our Europe,” says Sonja Stuchtey (47), initiator and managing director of Alliance4Europe. Founded in November 2018, the NGO is opposing this with the Europe-wide omnichannel campaign #vote4friendship. Its aim is to break the silence of non-voters aged between 18 and 35 across Europe and to motivate at least three million of them to cast their vote.

Alliance4Europe was founded by entrepreneur Sonja Stuchey together with 25 Europeans in November 2018. It represents an agile network of civil society groups and citizens in Europe who are committed to safeguarding the European Union and its values. The first milestone of the commitment of Alliance4Europe and all its many supporters, partners and local participating organisations in all EU member states is simple: by uniting civil society in a common cause, they want to reinforce the positive image of the European Union among young Europeans in the run-up to the elections for a new EU Parliament on 26 May 2019. In addition to the music video initiative, via the newly created “Alliance EU Wiki” Alliance4Europe is also initiating and coordinating information campaigns, bar camps, panels and many other decentrally organised projects throughout the whole of Europe under the motto #vote4friendship.

After the European elections, Allianz4Europe will continue to support projects that encourage a dialogue in Europe. It promotes pro-European groups and organisations, coordinates Europe-wide campaigns and, with its extensive combined online reach, enables the wide-reaching communication and sharing of best-practice projects and pro-EU narratives.

Alliance4Europe is a non-profit organisation (gGmbH) without any political affiliations.